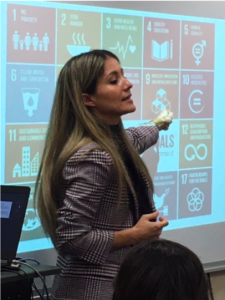 This is Argyro Kavvada, NASA earth scientist who was our guest speaker at the November 21 Lunch Bunch at Arlington Community High school. She literally held the young women’s rapt attention as she described her work at taking earth science data from many technological sources ( satellites, in particular) and using that data to determine their effect on events on earth. The incidence of cholera was used as an example of the impact of climate change which causes flooding in some parts of the world, thereby increasing the incidence of cholera in those affected populations. The young women were so interested in her presentation that they forgot to eat and ended up taking their lunches to their next classes. They were very participatory as well, asking Argie detailed questions and contributing some examples of climate change in their home countries. Argie is from Greece and is an immigrant herself. Her presentation, her demeanor, her success simply said to the girls that really, anything is possible!

The next Lunch Bunch will be held on Thursday, January 9. For more information or to sign up, contact Michele Milden.